The Two Rules of Watercolor

This watercolor is of the Alhambra, in Granada. The best view of this magnificent structure is from a viewpoint called Mirador de San Nicolas. It's a brick plaza at the height of Albaicín, a historical neighborhood "that retains the narrow winding streets of its Medieval Moorish past," according to wikipedia. Flowering vines drape over the brick walls and the labyrinthine passages are dotted with heavy wooden doors studded with metal embellishments. Many of the streets are already narrower than an alley, but they grow progressively smaller and turn to stairs as you near the top. One nearly expects the climb to turn to ladders before the paths meet and open into the plaza of San Nicolas.

In this square there are artists who vend their custom crafts displayed on blankets, musicians busking flamenco for the crowd, tourists sitting on the old brick wall and dangling their feet down above the endless view, toes tapping, tapping into the air.
There are old churches and mosques, flowers, fountains and orange trees (yes, even in December) and as fate would have it for our stay - the full moon as well.

My sister and I spent several nights there, including Christmas eve and Christmas night.

On our first visit I met an older gentleman selling his watercolor prints. He was hunched down over his blanket display and his white hair fluffed in the wind billowing up in a warm current from the street below. His works were very good and underpriced to boot. Tremendously inspired, I bought one.

As it turns out, I should have bought two.

"I'm learning how to paint!" I said, in overzealous, crappy Spanish.
"Bueno." he responded, with absolutely no affect.
I kept up with the friendly, curious tourist act anyway. What could I loose?
"How many years have you been painting?" I asked.
"Twenty Five." He said.
What is the most important thing to know?" I asked.
"You should probably study at a school or something, it's complicated."

I frowned. I didn't mean to, I really didn't. But like a child who dropped their sucker, I was a bit disappointed to say the least. He seemed to sigh as he changed his mind, and leaning closer, classically, he began to whisper a few tips.

I squeezed my brows together as tightly as possible so that I might catch the words between them. I felt myself squinting into sunlight that wasn't shining. He spoke softly and quickly, slurring, and always casting aside the last sylables from his words as though they were unnecessary ornaments.

My brain worked hard to stay on the second language surfboard and the stream of ideas came underneath it in a solid tide until a phrase I recognized emerged.

"There are two rules in Watercolor," I caught. "They are very very important."
Perfect, I thought. This should be good, and he's being very kind to tell me.
"Try not to break them." He said, "Ever."
"The first is: always begin with painting the background and work forward to the foreground."

I looked down at his works: interminable sense of distances in the atmosphere, alchemical intersections of color, lace-like detail etched into moorish doors and flowering trees hovering above enchanted gardens. Arabic calligraphic carvings into white walls glowing with summer sunlight.

I could start to see it. How he was building them from back to front, with the most amount of detail always on the flower in the foreground, as though you could yourself pluck it from the rest of the portrait and put it in your breast pocket.

I've been thinking about that rule for the last few hours working on my little landscape here. It's been very helpful.
I'm of course quite grateful for his tip, and I can tell that I'll probably think of this man with his stiff leather hat and his tight lips hiding missing teeth every time I work on a watercolor for the rest of my life.

But in the meantime, I have to admit....

I never did understand what the second rule was. 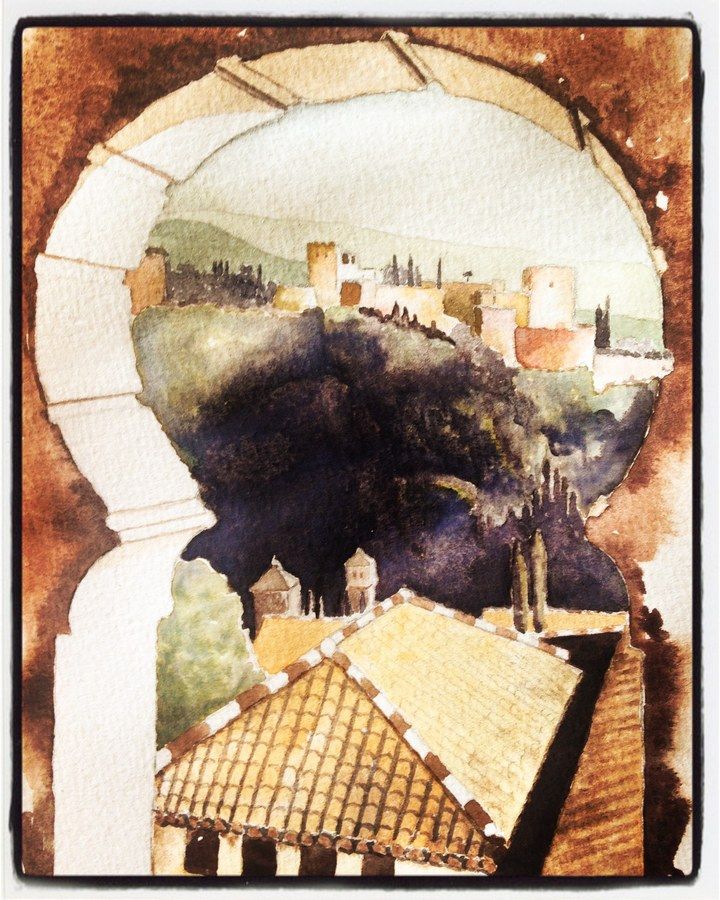